What are you looking for?

Once the rivet patented by Levi Strauss and Jacob Davis in 1873 expired in 1890, they decided to give work jeans numbers. Besides the cheaper 200 series, there was also a 500 series. Number 501 is the only model that has survived. The design has undergone slight changes over the years. Nowadays, the 501 model is mainly known for its double arch stitches on the back pockets, the leather label with the two horses and the red tab. LS&CO initially used common work wear materials such as canvas and denim.

The distressed section on a pair of denim, where the fabric show results of heavy wear. Often created with use of the washing technique with pumice stones on pre-washed jeans.

This washing technique could singlehandedly represent the 1980s. Acid wash used pumice stones soaked with chlorine. This would strip off the color of the top layer of the fabric creating sharp contrasts all over the jeans, which were popularized by hard rock and metal acts in the 8s0s. Candida Laundry patented the process in 1986.

The first major supplier of denim fabric in the United States, located in a New Hampshire factory town. This was the source of denim used on the first pairs of jeans by Jacob Davis and Levi Strauss.

Generally refers to the decorative double stitching on the back pockets, shaped like bat wings. Levi’s is credited with this iconic jeans. It goes further than mere association though – particularly in the U.S., where no other denim brand is allowed to sell jeans with patterns that even remotely reemble the Levi’s arcs. Japanese reproduction brands have imitated the arc’s, an act that resulted in several lawsuits.

A word borrowed from Japanese, the term describes the selective fading alongside the ridges of the seams. In most cases it concerns the seams on the back-yoke, back pockets, the belt loops and zip fly.

While a “black cinch” traditionally refers to the leather strap attaching the saddle around a horse’s back, on a pair of jeans it is used to tighten the waistband. Also known as a martingale is consists of a denim strap and a buckle. Jeans with a back cinch also referred to as “buckle back” and most jeans manufacturers abandoned the back cinch in 1942.

Traditionally a paper or cardboard flap attached to the right back pocket to indicate differences in size, finishing, fabrics and shapes. Also used as a marketing gimmick, it often featured illustrations that referred to a specific theme associated with that specific model, like Westerns.

Wide-cut pants, with a low-slung waist, a very low crotch and the polar opposite of skinny jeans. The oversized models were initially especially popular among skaters and in hip-hop scenes. It supposedly originated in American prisons where prisoners wore their oversized overalls but were not allowed belts.

These tacks are closely spaced stitches, forming a band, or bar, on virtually all denim garments that act as reinforcements on stress points such as zippers and pocket openings.

It is said these models were first spotted with US navy men wearing the bell-shaped pants, although clothing could vary per ship. The bell-bottoms were extremely popular during the 1960s and 70s, it had a tight waist and thighs, but flared below the knees. This gave the jeans a vague resemblance to the shape of a bell, which is supposedly how the name

As the name indicates, these were placed around the waist to hold a belt. They replaced the suspender buttons 1920s to supply the trend of belts that emerged after the WOrld War I. Most jeans have five loops, but some brands like Wrangler have seven, for extra support.

A chemical that is needed in the process of fading denim. Typically, either sodium hydrochloride or potassium permanganate is used.

The purest form of denim. That is, denim that has not been washed, or treated in any way. Hence it is quite rigid. G-Star is credited with the term “Raw denim”. At any rate they were the first to use it for their untreated, unwashed products in 1996.

A specific model that is figure hugging and gets narrower, skinnier, towards the ankles.

Twill is a weave technique that gives the fabric a characteristic pattern of diagonal lines. Twill weave is not limited to a certain type of material and can be applied to cotton, silk, linen, wool, or any combination of these materials. All twill fabrics consist of warp threads and weft threads. The warp threads run along the lenght of the fabric and the weft across the width. The way in wich these threads are crossed determines the strengh and look of the woven fabric. Thread quality and width also influence the fabrics’s flexibility and sustainability. Denim is often specified as 3×1 twill, as opposed to a more lightweight denim (under 10.5 os) with 2×1 twill. With a 3×1 fabric, the weft thread is woven three times over the wrap thread, one time under, then again three times over the wrap thread, and one time under, and so on… 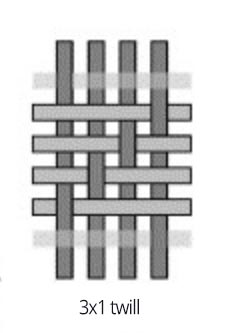